Cassie and I spent several hours yesterday afternoon on a rock at Saksaywama, the remains of an Inca fortress perched above Cusco at 3,701 meters. We arrived at the site only two hours before the Inti Raymi procession, on the heels of roughly 800,000 Peruvians and paying tourists (I'm guessing here), so our vantage-point from the wrong side of the hill was lousy. Balanced on tiptoes, and ruining our backs in the process, we witnessed only fragments and impressions. Streams of gold, red, and white dancers donning feathery forms, flowing tunics, flat pancake hats. Incan rites barked from a raspy megaphone more than a mile away.

Resigned to a rather unmystical bake in winter sun, Cassie and I instead enjoyed what was close at hand: people and panoramas. All about our rock, an island that, though no larger than a tree stump, we did not have unto ourselves, gorgeous Quechuan families lounged in the dead grass, monitoring their impish, photogenic children as they ran and played. Feasts of roast chicken and cuy, steamed choclo (freakishly large corn), boiled potatoes, and oodles of oiled noodles overwhelmed the nose. The rending by hand of chicken and cuy (guinea pig) parts was particularly gnarly. 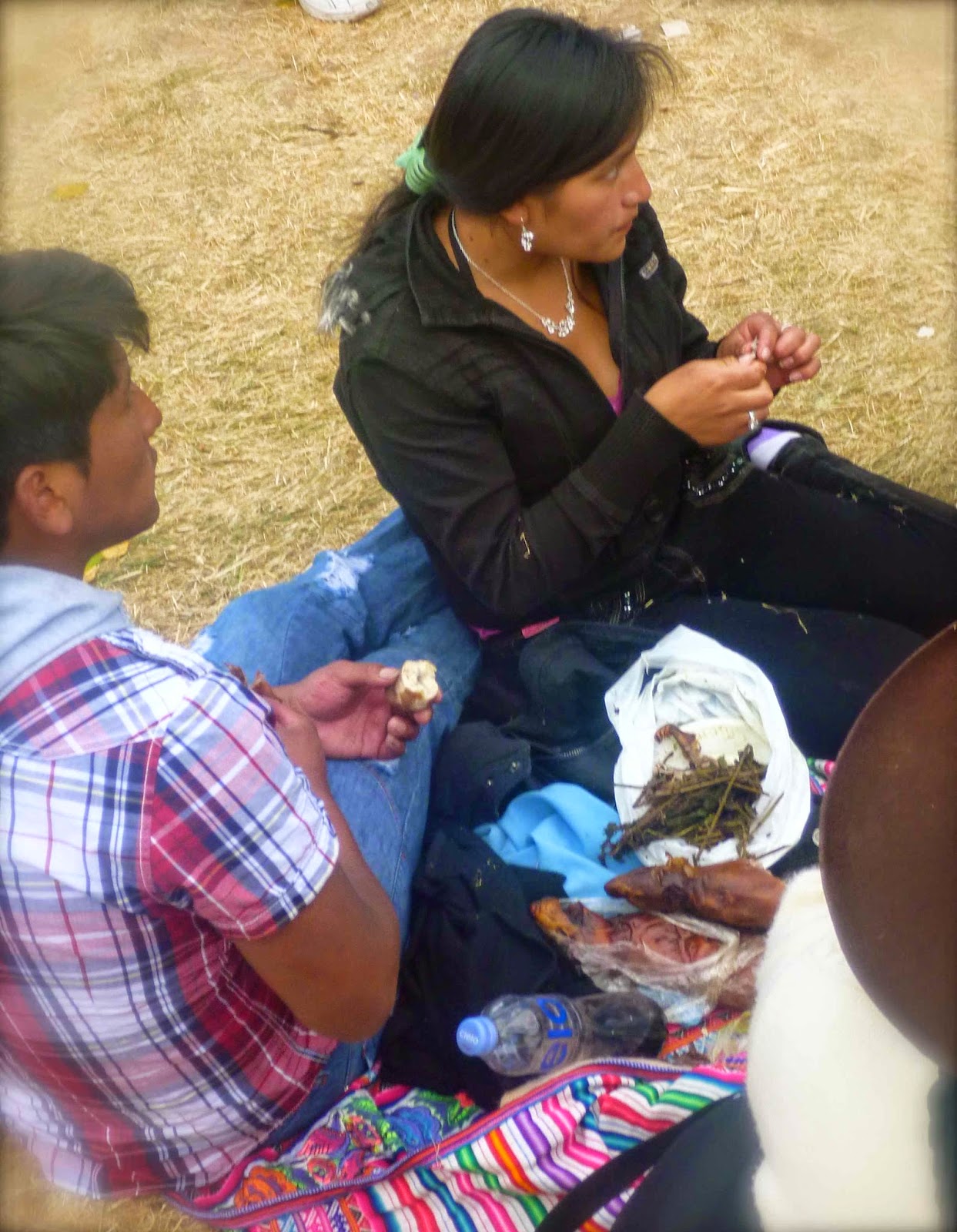 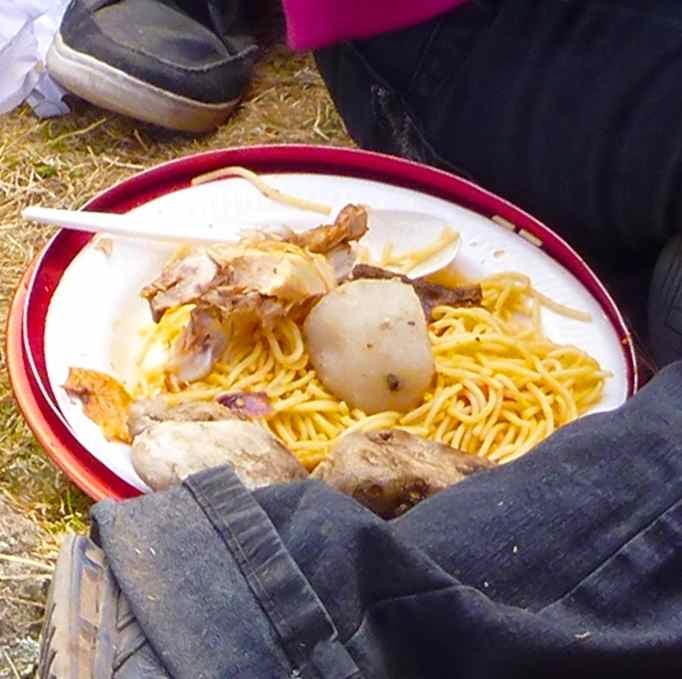 Then there were the desserts. 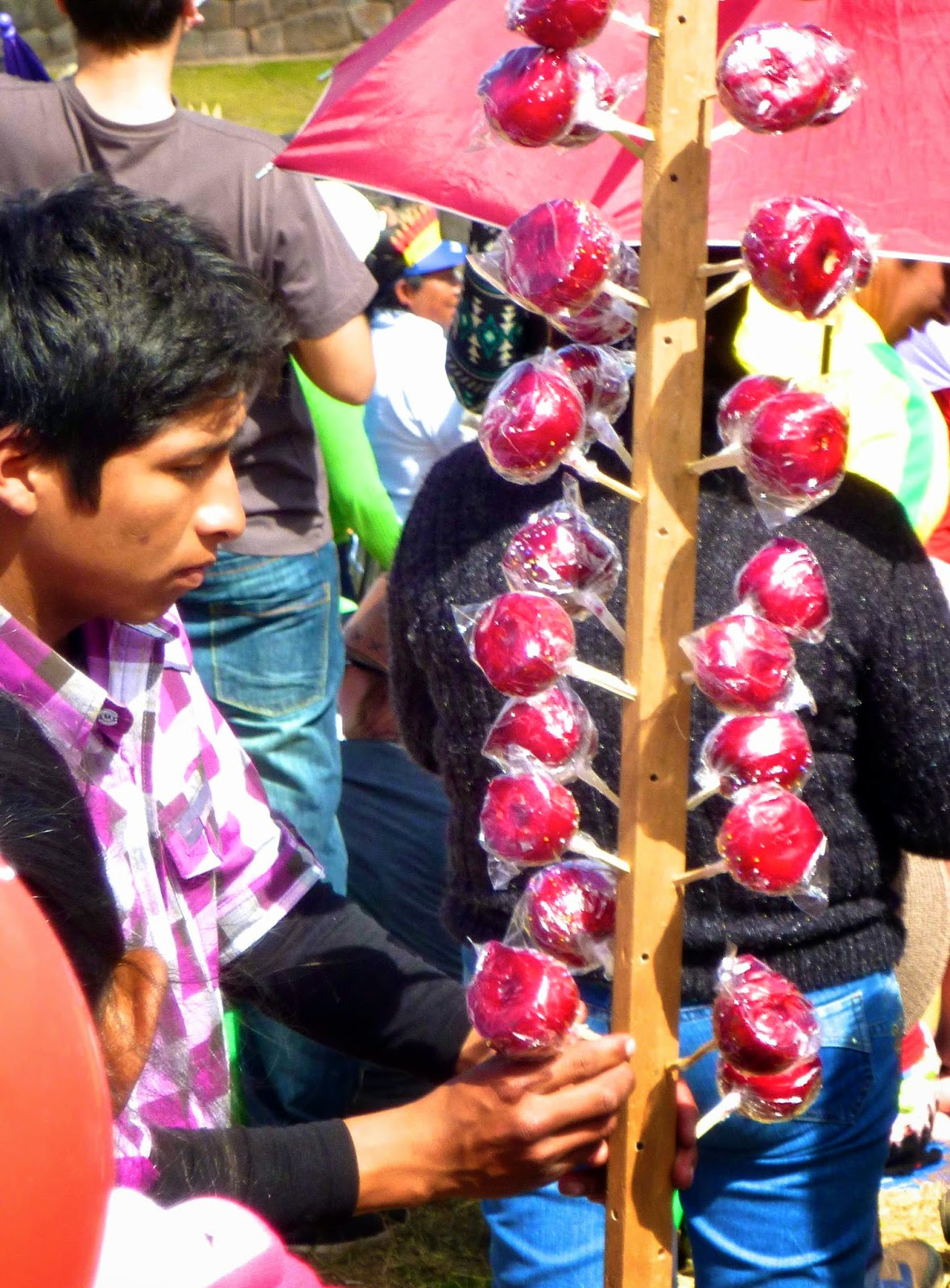 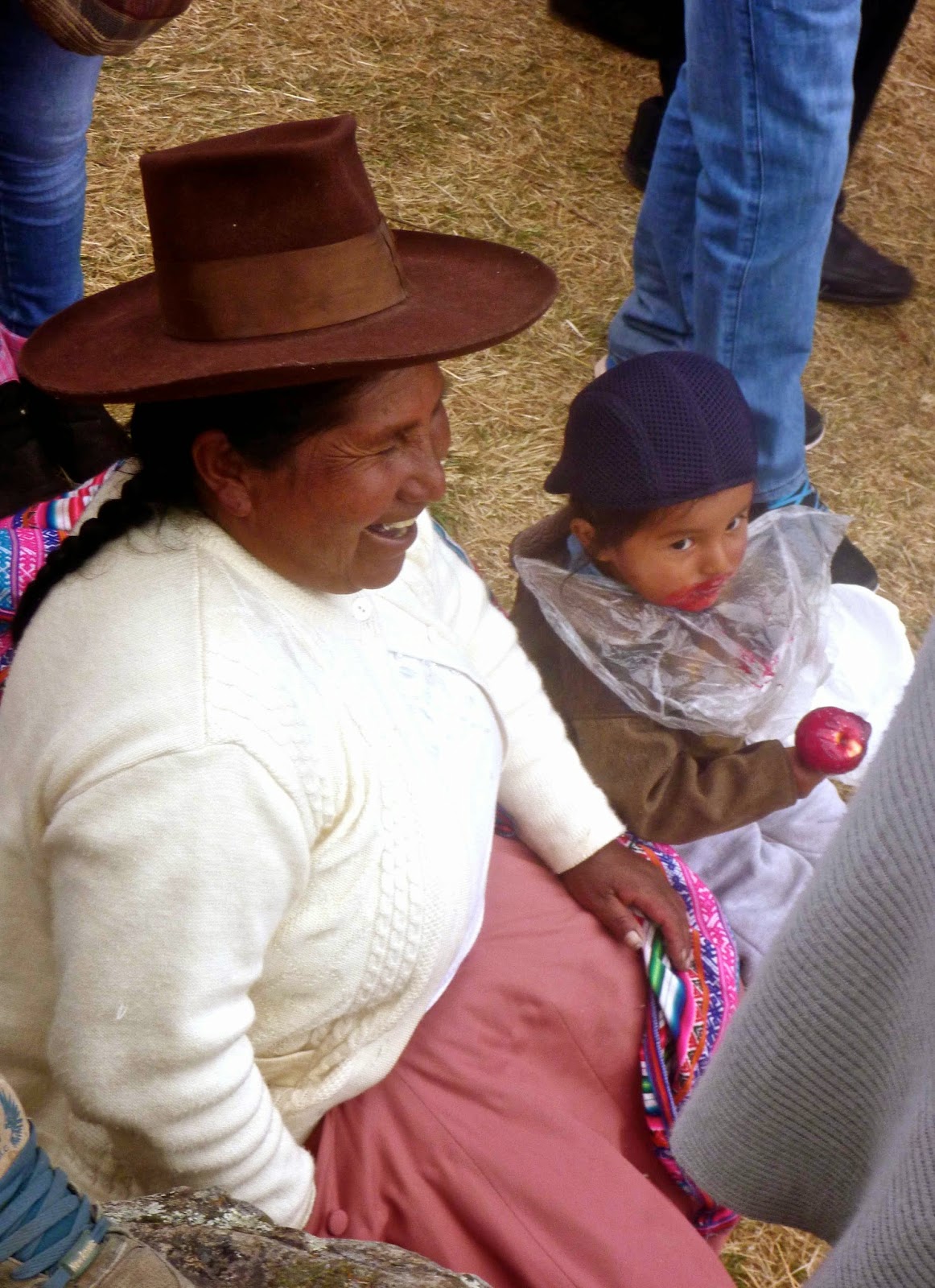 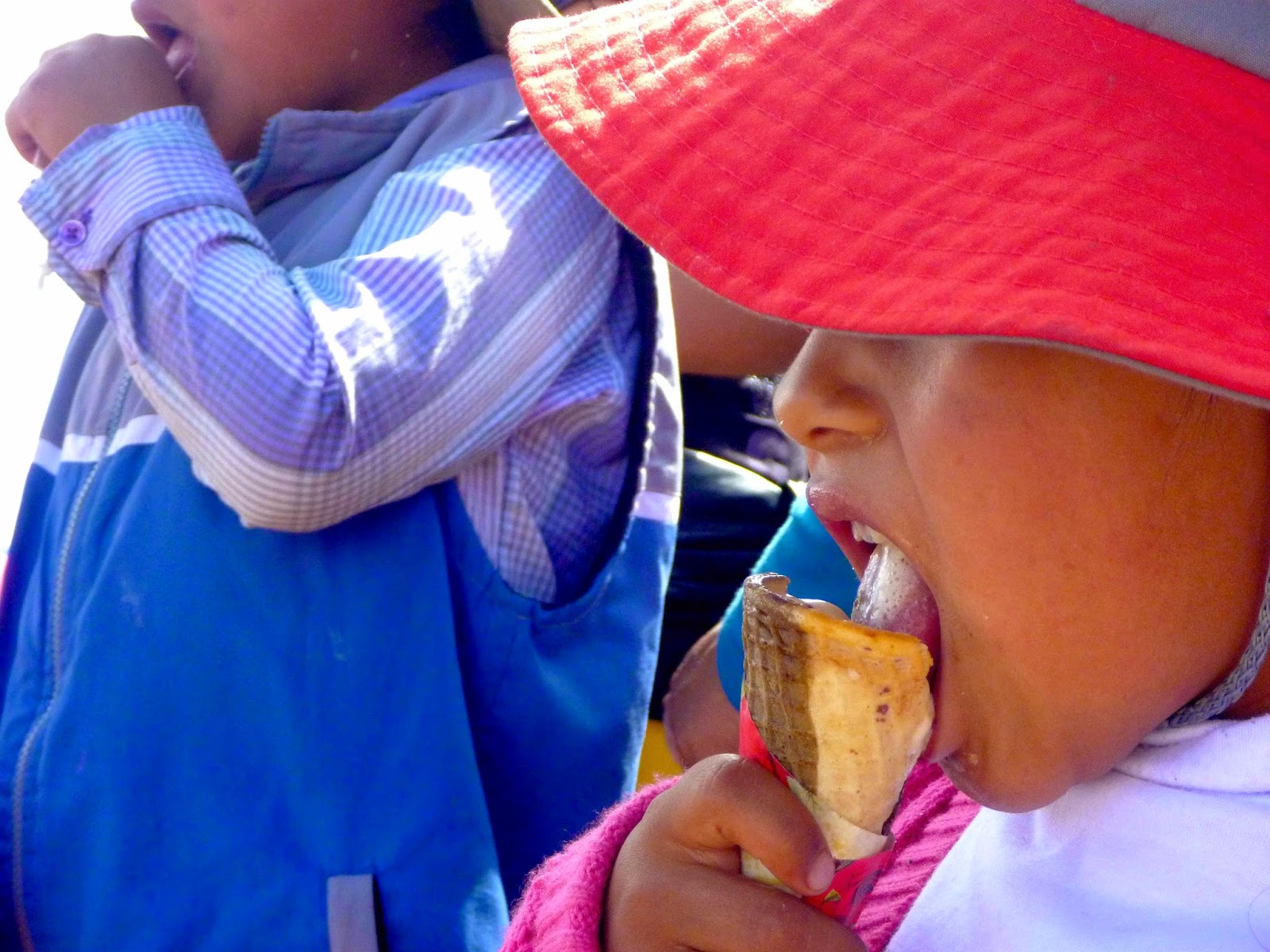 Oh, and the mountain vistas were just as intoxicating. 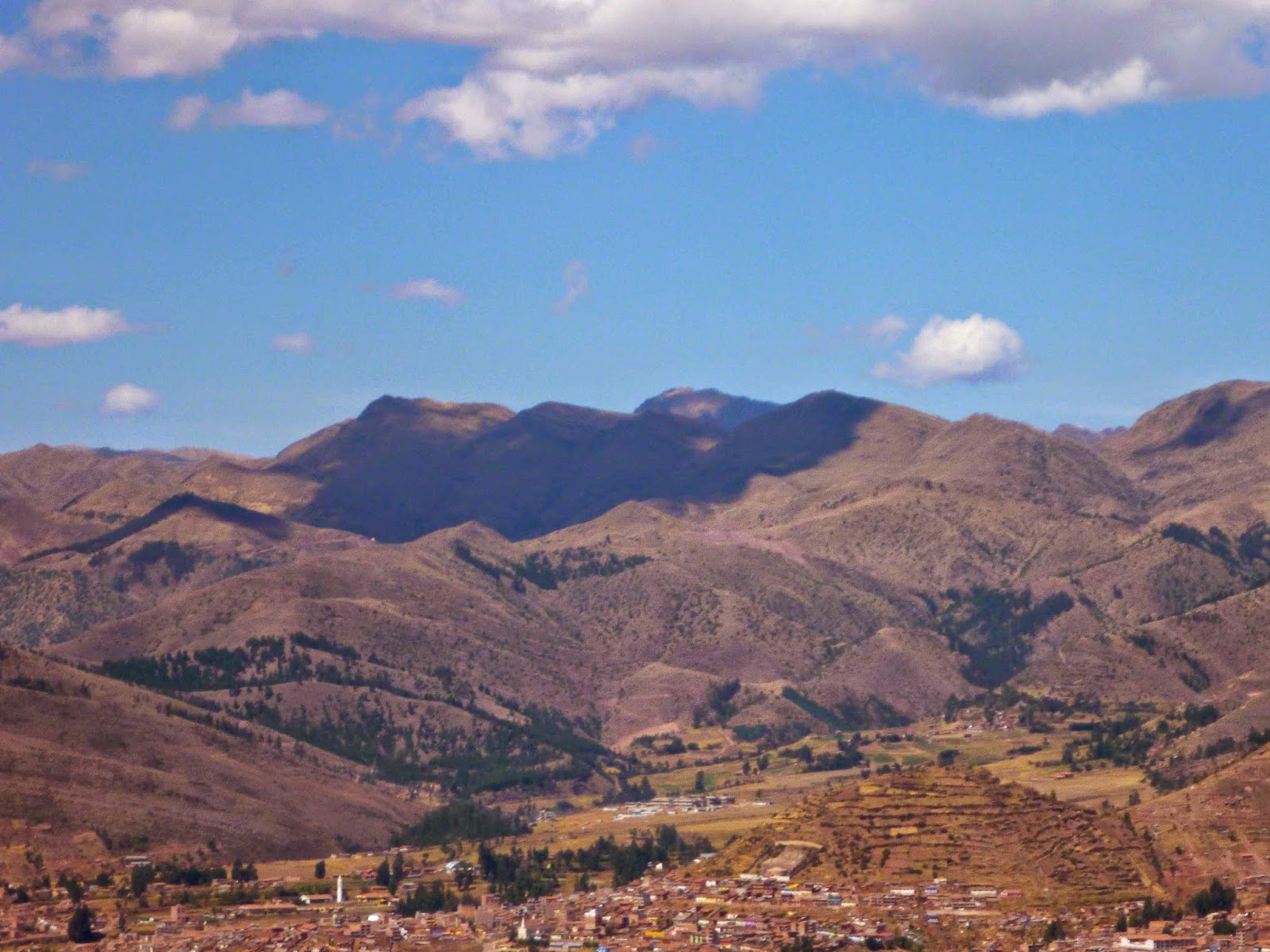 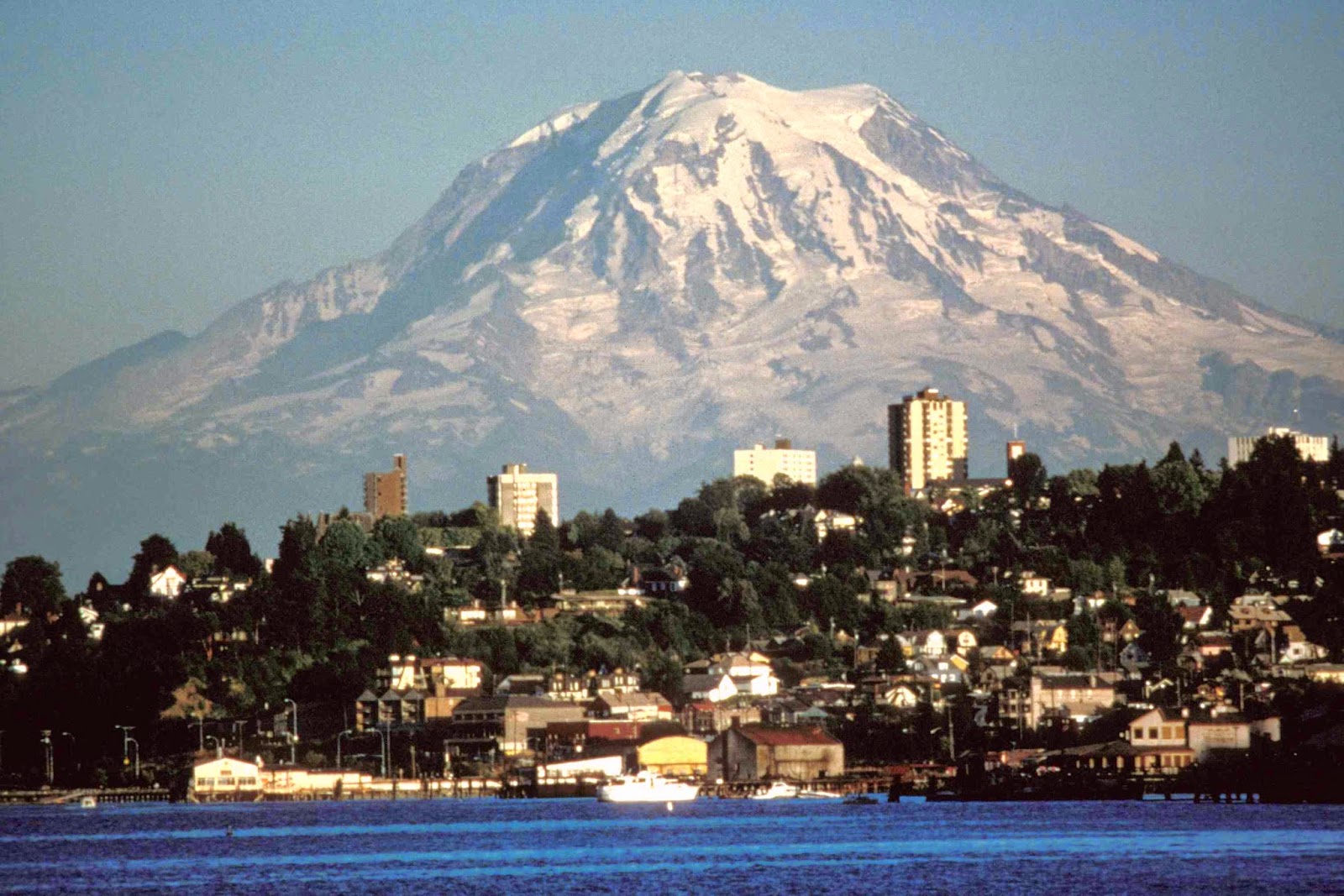 The difference in snowpack is striking but not at all surprising. Whereas Mt. Rainier stands at about 46.8 degrees latitude north, Cusco is at 13.5 degrees latitude south. The region's proximity to the equator makes the accumulation of snow and ice a comparatively difficult affair. While Cusco gets occasional rain and hail, it never snows. In fact, the only recorded instance of snow in the city was in June 1911.

What may surprise those who know little of Peru's wildly variable climate zones is that the cities and natural ecologies of this snow-free subtropical highland environment depend for their survival, as do the dry and often desert-like environments to the west as far as Lima, on runoff from a network of Andean glaciers less than 60 miles away. For perspective: the Rainier photo was taken from more than 60 miles distance. For the people of the Puget Sound, the abundant supply of water for drinking, agriculture, and power generation is readily apparent in broad vistas of snow-capped Cascades and Olympics. For Cusquenos, the source of their water is concealed in much smaller areas at far higher altitudes.

In total, glaciers in the Peruvian Andes account for roughly two-thirds of the world's tropical ice. Yet the Quelccaya Ice Cap, the largest of these glaciers, covers only 17 square miles (compare that to Mt. Rainier National Park, which encompasses 370 square miles). In Peru, snow only accumulates above 14,500 feet, more or less, and as global temperatures rise in the coming decades, so will the altitude of the snow line. And it's happening quickly, even measured in people years: in the past 33 years, the Quelccaya Ice Cap has shrunk by 30 percent. Ice core samples recently taken by a group of researchers at Dartmouth College strongly support the connection between the retreat of Peru's glaciers and the rise in air temperature.

...that is a sobering finding, considering how fast the Qori Kalis glacier is now retreating. Dr. Thompson documented last year that a part of the glacier that had apparently taken 1,600 years to grow had melted in a mere 25 years. He interpreted that as a sign that human emissions and the resultant warming have thrown the natural world far out of kilter.

Now go back to the image of Cassie and me on our narrow perch on an outcropping of rock at 12,000 feet---barely room to stand, let alone sit down. That's Peru's water supply, clinging to its last bit of suitable elevation, evaporating in an increasingly unsupportive environment. Unfortunately, the temperature is rising faster than that mountains are growing in stature. Unless Peru can invent a means to grow its mountains, the future of its glaciers will be grim, as will the rivers that flow into the Sacred Valley, and down into Peru's coastal plain, where most of the country's population lives.

What would Peru look like without its tropical ice? How would it support its agriculture? Where would it obtain its energy, 75 percent of which currently comes from hydroelectric sources? What would happen to its capitol of 8 million people, currently situated on a coastal desert?

Pachamama is in dire straits, indeed. 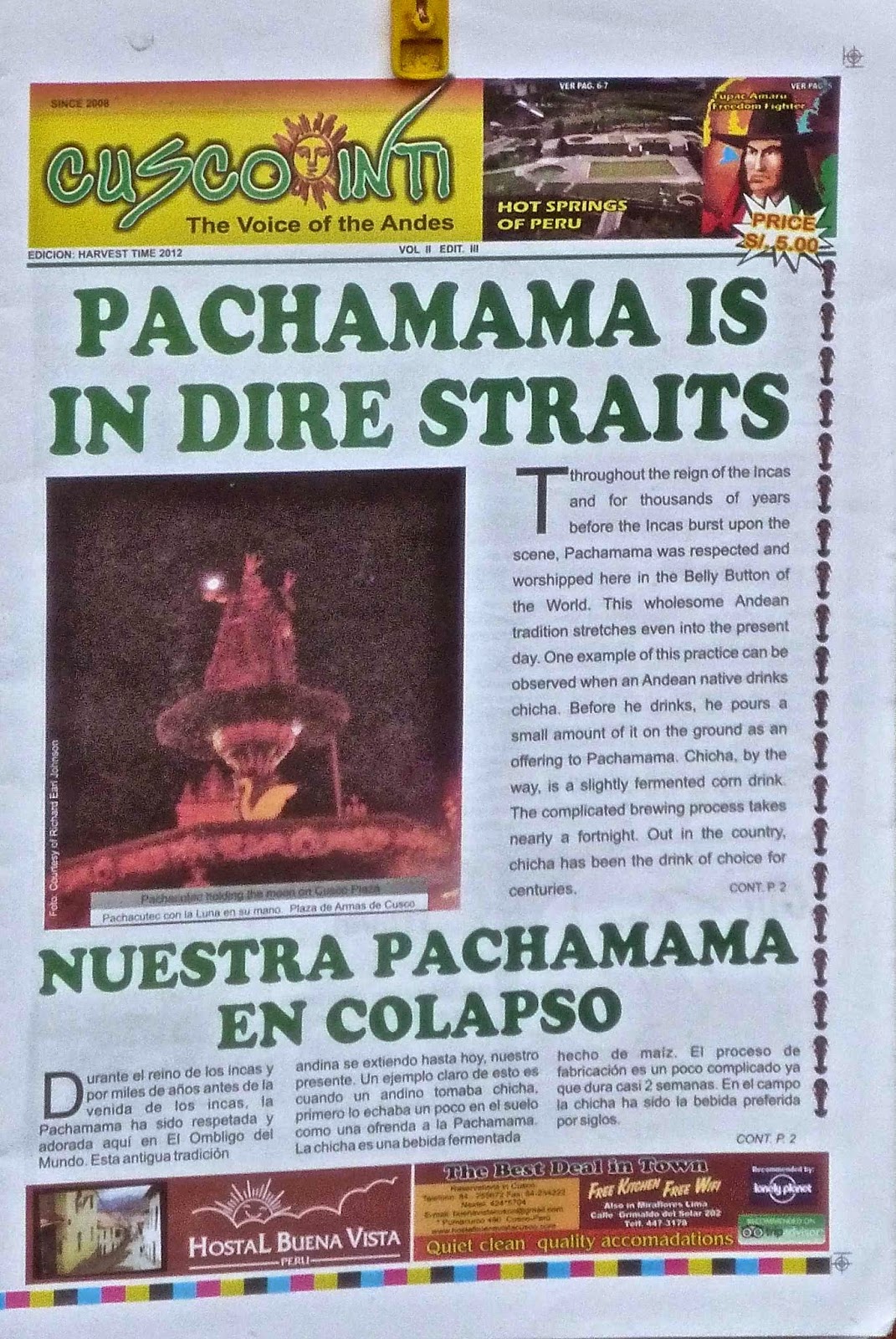