How do you measure the impact of forests on global climate? In Peru, the Amazon rainforest and other forest lands provide crucial habitat for a diverse bunch of creatures, including monkeys, sloths and a multitude of birds. But forests also help fashion our atmosphere: Every other breath we take is fueled by the oxygen that plants crank out during photosynthesis. In the process, plants suck up carbon dioxide from the atmosphere and store that carbon in their trunks, roots and branches. This keeps atmospheric CO2 levels much lower than they would be otherwise as we continue to add the greenhouse gas to the atmosphere by burning fossil fuels. Trees are, forgive me, one of our biggest hedges against climate change.

Each year some of the stores of carbon bound up in vegetation are lost through deforestation, wildfires and other forest degradation, which accounts for about 15% of anthropogenic CO2 emissions to the atmosphere each year. All these things have taken their toll in Peru. And although forests help slow down the progress of climate change, they are also vulnerable to it. Hotter, drier conditions attributed to climate change are threatening the longevity of California’s Sequoias and other ancient trees around the world, and climate models have predicted that droughts could also threaten the Amazon rainforest in the future.

Protecting Peru’s rich forestland would be more economically viable if its carbon could be considered as an asset in global markets, such as the one proposed by the United Nations Collaborative Programme on Reducing Emissions from Deforestation and Forest Degradation in Developing Countries, or UN-REDD. But to be in a position to do this, it’s important to be able to quantify this carbon with high accuracy and spatial resolution.

So scientists at Stanford’s Carnegie Institution for Science, together with the government of Peru, set out on an ambitious project—to map the country’s “carbon geography,” or how much carbon is bound up in aboveground vegetation. And that’s not easy, especially in a country with such diverse landscapes as Peru’s. Satellites can “see” surface vegetation, but scientists haven’t yet been able to translate that data into carbon units. And direct field measurements to quantify carbon stored in vegetation, which involves tromping through forests and measuring trees by hand, are far too laborious to carry out at high resolution on a country-wide scale. Recently, however, remote sensing methods have made it much easier to get a good ballpark estimate from the sky.

To map Peru’s carbon, Stanford scientists led by Greg Asner surveyed large swaths of the country with a plane called the Carnegie Airborne Observatory. It’s outfitted with lots of instruments, including one that carries out a remote sensing technique called light detection and ranging, or LiDAR. About 500,000 times per second, this instrument zaps laser pulses of near-infrared light onto the land surface. Some of this light bounces off each layer of vegetation, such as a forest canopy, and some of it passes through to hit the next layers down. By capturing the patterns of light that bounce off all these layers, the scientists can reconstruct a three-dimensional map of the vegetation. Then they calibrate these data with field estimates of carbon bound up in different types of vegetation to generate a map at one-hectare resolution.

The resulting map shows that Peru’s forests hold about 7 billion metric tons of carbon above ground—that’s equivalent to nearly three-quarters of the carbon released by fossil fuel combustion and cement production in 2012. The map shows how important forest reserves and other protected areas are to the carbon stock of Peru: about one-quarter of the total carbon is in these protected lands. Not surprisingly, the largest amounts are in the largest parks, including the Alto Purus, Manu, Cordillera Azul and Bahuaja Sonene national parks.

“If you choose carbon as your currency, parks in Amazonian Perú are the banks, and the bigger the area, the closer it gets to being Fort Knox,” Miles Silman, a scientist at Wake Forest University who coauthored the report, said in a statement.

Of course, right now, having an embarrassment of carbon doesn’t pay the bills for Peruvians. “How can we save what we can’t don’t understand?” asks Greg Asner, the Stanford scientist who led the research, in a TED talk. The team’s high-resolution map gets us one step closer to that understanding. You can read the full report here. 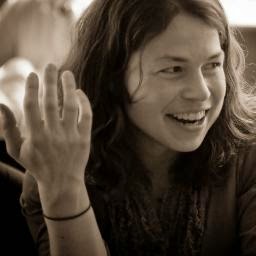 Deirde Lockwood's writing has appeared in various publications, including the Chicago Tribune, Nature, Science and Chemical & Engineering News. She's crossed the Pacific eight times on a container ship to study how the ocean absorbs atmospheric carbon dioxide and earned her PhD in oceanography at the University of Washington. She's also blogged about her experiences doing fieldwork on the Mekong River in Thailand, Laos and Cambodia, and spent a year in Iceland as a Fulbright fellow. She's currently a contributing editor at Chemical & Engineering News and curator of the magazine’s archival Tumblr blog, The Watch Glass.